Given the relatively limited number of species in the area the task of identification is, in principle, fairly straightforward, and the different types of butterfly life cycle also give a clue as to when and where to expect what. Some species over-winter as hibernating adults and can appear rapidly when conditions start improving with Spring; others spend the winter as pupae, and need only emerge as adults when winter ends. A third group over-winter as caterpillars and must pupate before emerging as adults. This tends to be reflected in the time when flying adults are seen, with the adult hibernators appearing first, followed by “pupae species” and then the “caterpillars species". There is a slight complication in that a few species come to the UK as adult migrants, and can pop up any time when conditions are suitable in spring or summer. So, bear in mind that the description here is only a rough guide, and there is much variation between years and between sites.

Where you look for butterflies or moths, to some extent depends on what you hope to see. If you are happy just to identify whatever comes your way as you walk, then in favourable conditions the adults of some species can be found wherever there are good numbers of flowers. If, on the other hand, you are keen to track down some of the less common species, then you may need to be more selective in the habitats you chose to explore. Red Admirals and Small Tortoiseshells, for example, lay their eggs on nettles, and this is where the caterpillars may be found. It should be borne in mind that butterflies, like us, prefer to be out and about on bright sunny days with low wind speeds  - and moths? They do NOT all only come out at night, and you can see plenty of them flying around during the day as well.

Weather permitting, these are good months for butterflies in Wester Ross, especially the Scotch Argus.  Others that can be seen (aside from thoise we've already listed) are the - (Occasional) Grayling - Painted Lady  - Speckled Woods - and Meadow Browns.

And for SEPTEMBER onwards.....

If the weather is friendly, butterflies do not disappear at the end of summer. Species like Red Admiral and Peacock can occur quite late. A Peacock was sunning itself in Inverewe Gardens on 16 October 2007, along with a rather tatty Red Admiral. The latter species was also seen on 28 October 2007. Not bad for the NW Highlands!
Further reading on the subject? Look no further than this handy reference book on local wildlife, by Gairloch based Dr Barry Blake: 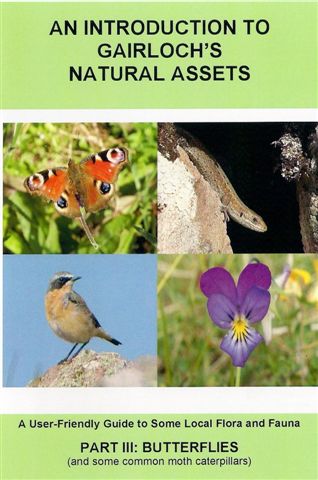